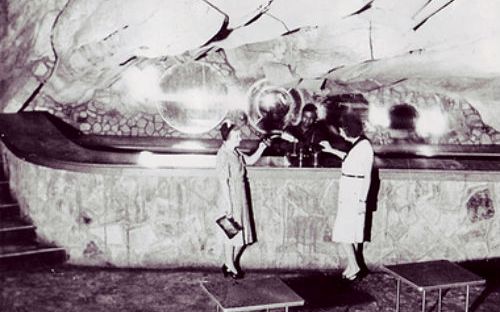 Below is an excerpt from my book “Forgotten Tales of Alabama.”

During America’s Prohibition era from 1920-1933, people were continually looking for places to drink illicit liquor. In Alabama, some of the best places to hide from the law were caves.

Three caves were reputed to have been used as nightclubs, and one became a famous nightclub years after Prohibition was repealed.

DeSoto Caverns was used as a nightclub in the 1920s and gained such a reputation for violence that it was called “The Bloody Bucket.”

The cave was used during the Civil War to mine saltpeter, or calcium nitrate, which was used to make gunpowder desperately needed by the Confederate Army. The Army paid men up to 59 cents per pound for saltpeter.

After the war, the cave was left empty until 1912, when Ida Mathis and a group of investors bought the cave for its abundant onyx. When options to mine the cave failed, Ida’s son Allen bought the partners’ interests and the cave was once again left empty and available for illicit purposes.

In the 1920s, residents would come to the caverns for a little moonshine, some square dancing and perhaps some gambling.

As is typically the case when drinking, gambling and carousing are combined, fights would break out. Before long, these fights resulted in shootings and various injuries, leading to the name “The Bloody Bucket.”

The cavern’s reputation grew until law agencies heard of it and federal agents closed it.

In the early 1960s, Allen Mathis began to develop the caverns into a show cave and it opened to the public in 1965. Also that year, University of Alabama archaeologists unearthed remains of a 2,000-year-old Indian, which are now on display in the caverns.

Shelta Cave in Huntsville was purchased by the National Speleological Society in 1967. NSS headquarters are located directly above the cave, which is currently open only to society members.

The cave is 2,500 feet long and has one of the most diverse ecosystems in North America. The NSS uses Shelta to study cave biology. Scientists have found nine unique species – three beetles, two crayfish, a shrimp, and three other arthropods – in addition to other cave life.

However, before the cave was purchased for study and preservation, it was used as a party palace. Beginning in the late 19th century, before Prohibition began, Shelta Cave was the site of parties and underground boating.

In 1888, according to newspaper accounts, local residents would descend by ladder 30 feet into the darkness of the cave and pay 50 cents to dance by candlelight.

The cave was closed for a time in the early 20th century. On August 5, 1906, the Atlanta Constitution ran a story with the headline: “They Will Be Opened Again: Great Caverns at Huntsville Are To Be Given Electric Lights.”

Reportedly, the cave was again used as a dance hall during Prohibition. Shelta Cave was placed on the National Registry for Natural Landmarks in 1971.

While some historians believe Bangor Cave in the Bangor Community of Blount County was used as a speakeasy in the 1920s, it didn’t gain widespread fame until 1937.

In that year, a fancy club and casino opened in the cave 30 miles north of Birmingham near where Interstate 65 is now located. It was billed as “America’s Only Underground Nightclub.” J. Breck Musgrove and investors had lined the cave’s floor with tiles, installed mahogany gaming tables, and carved a bar and orchestra pit from stone.

People came from miles around to drink and dance beneath a ceiling painted to resemble the sky but the casino, which was illegal, was located behind a locked door and open only to a special few with especially fat wallets.

A spur of the Louisville and Nashville Railroad that took patrons to Blount Springs would stop at the rural cave for 10 cents.

When Governor Bibb Graves heard of the sinful goings-on, he included Bangor Cave on his list of “notorious dives” he wanted closed.

In August 1937, the Blount County newspaper reported a raid on the club: “Hitting with a bang that reverberated over the entire state, our new sheriff, Ed Miller, raided Bangor Gave on Saturday night just after the clock had passed the midnight hour and made a haul not only in gaming tables, but in arrests and drinks that make wild men wilder.”

More raids would be required before the club finally closed in 1939. By then, the press had turned against the club. The Southern Democrat in Oneonta called it “a den of vice unequaled in Alabama.”

Bangor Cave is still a popular destination but those who come want to explore the cave and its history. Visitors can see the outline of the bar and the carved area that served as an orchestra pit.