On Tuesday, I mentioned some unusual roadside figures I saw in Robertsdale, AL. Baby Girl and I stopped to take photos on our way to Gulf Shores. (Click here to read it). According to the website RoadsideAmerica.com, the figures came from Styx River Water World, an amusement park once located in Foley.

However, I felt the RoadsideAmerica.com entries must be incorrect because the figures – a chicken, chef’s head, bear and seal – did not look like refugees from a water park. I’d written about the defunct park for AL.com after it was featured in a book by Tim Hollis, an expert in roadside attractions from the 1950s-1970s.

The park closed in 2001 and, for the next decade, the park’s oversized figures such as those of a cow and a cowboy were left to deteriorate (see photos below). These days, nothing is left of the park but a small ticket booth, according to the Greater Baldwin County Chamber of Commerce.

Hollis said he can’t say for sure if the figures I saw at Kyser’s Pipe & Culvert were ever located at the Styx River park but he knows the origins of two of them: the bear was a promotional figure for A&W Root Bear before it was painted and the seal was a mass-produced miniature golf figure, he said.

“The bear in the sweater is the A&W Great Root Bear that was featured on so many premiums and other advertising in the 1970s and 1980s,” Hollis said. “He obviously stood in front of an A&W outlet at some point before being repainted and moved to Styx or wherever he ended up.”

Here is my recent photo of the bear alongside a photo of an A&W Great Root Bear from Tim Hollis.

Hollis also said one of the seal figures was located at a mini golf course in Panama City before it was bought by the now-defunct Zoo-Land Golf in Panama City (There is a Zooland Tiki’s Mini Golf in Gulf Shores.) “I have no idea whether the seal in your photo could have been rescued from PCB, but it could have wandered around before landing at Styx River.” 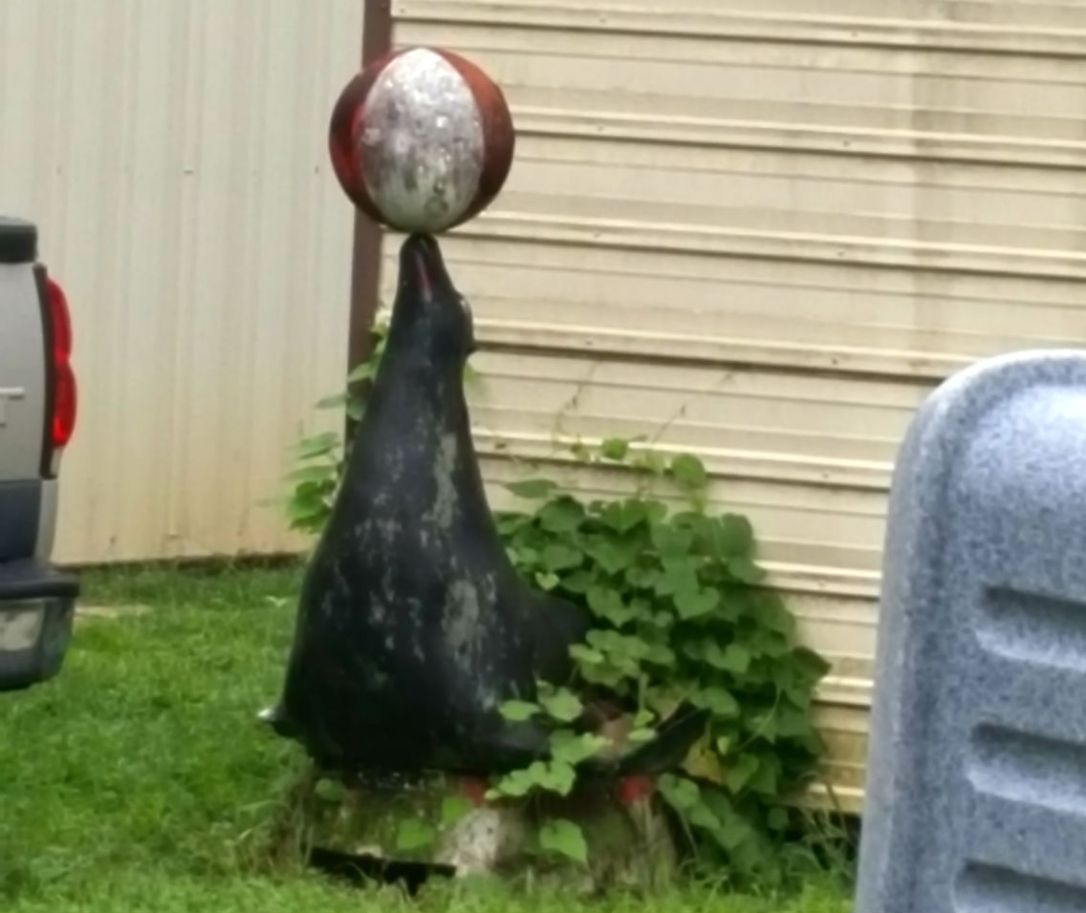 And the chef’s head from the same site. Do you know where they came from?

Here is a photo I found on Pinterest of the cowboy from Styx River Water World after its closure.

Here is a map I found online of Styx River Water World.