Y’all know I am fascinated by cemeteries, which some people think is strange. But anyone who has ever seen the beautiful statuary or intricate cast-iron work knows they can be like outdoor art galleries. And sometimes the epitaphs can be of historical interest … or just downright funny. I like those best, which I am sure is a surprise to no one.

Click here to read how I want my own obit and funeral arranged.

One of the most interesting cemeteries Sweetums and I have visited is Cave Hill in Louisville, Ky. It is filled with amazing artistic headstones and tombs, as well as graves of famous people, the most iconic of whom is Col. Harland Sanders, founder of Kentucky Fried Chicken.

Because there were so many, I won’t show all of our photos in this post but I wanted to showcase the graves of four interesting folks:

Harland Sanders (1890-1980), the founder of Kentucky Fried Chicken, is buried in a place of honor in historic Cave Hill Cemetery in Louisville. From the entrance to Cave Hill, a yellow line is painted to direct visitors to the gravesite, the most visited in the cemetery.

Sanders operated a roadside fried chicken stand during the Great Depression and opened his first franchise in 1952. The chain would grow until there were restaurants in every state in the nation. Sanders, and honorary colonel, became the company mascot, dressed in his iconic white suit and black bow tie. KFC is the fourth largest chain in the world.

Sanders’ grave is marked with four columns surrounding a bronze bust of Sanders that was sculpted by his daughter Margaret. His wife, Claudia Ellen Sanders, who died in 1996, is also buried at the site.

The slab over their graves says Sanders was the “Founder of the Kentucky Fried Chicken Empire.” Visitors have left objects on his grave, including KFC buckets and ketchup packets, and pennies.

Harry Collins was born in 1920 in Glasgow, Ky., and loved magic. During WWII, he was assigned to the entertainment branch of the Marines and performed magic for the troops.

After the war, he moved to Louisville and became a Frito-Lay salesman. He worked for 20 years as the Frito-Lay man by day and magician at night and became well-known around the city.

Collins was named the company’s “corporate magician” in 1970, likely the first of his kind … ever. He would promote the brand by traveling and performing magic shows, always exclaiming “Frito-Lay!” before the big reveal. His grave is marked with a life-sized statue of him wearing his tux and performing a magic trick, his cape draped nearby.

It’s a very cool statue and he got his entire body while Col. Sanders only has a head. Just sayin.’

Patty Hill (1868-1946) was a local kindergarten teacher who, along with her sister Mildred, wrote the song, “Happy Birthday to You.” The tune was originally written as “Good Morning to All.”

According to his entry on FindaGrave.com, “Locals would take bets on how much he would grow in a week and every Saturday night Jim would allow himself to be weighed and measured. Around 1830 ‘Big’ was added to his name and he became known as Big Jim Porter, The Kentucky Giant.”

His fame grew after a visit by famed author Charles Dickens to the U.S. FindaGrave says, “In April, 1842 Charles Dickens stayed briefly in Louisville. He visited Jim and wrote in his book ‘American Notes:’ ‘When he had shown himself and talked awhile, he withdrew his pocket instrument and went bobbing down the cabin, among men of six feet high and upwards, like a lighthouse walking along lamp-post.”

Big Jim ran a tavern and at one point traveled in a play based on “Gulliver’s Travels,” playing the giant. He would die young, at age 47, probably due to complications from his excessive growth. His casket was 9 feet long. 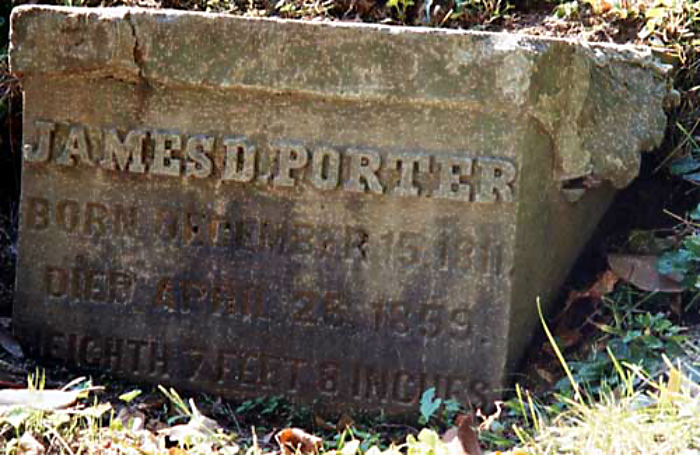