[Kelly Kazek] It was the twisted and spooky beech trees that inspired a theme park in the North Carolina mountains. From 1970 to 1980, the Land of Oz was a family attraction located at the top of Beech Mountain, the highest point in the state.

Be sure to view both galleries, Vintage Postcards and Autumn at Oz, below.

Grover and Harry Robbins, developers who owned the Carolina Caribbean Corporation, built the theme park hoping to draw tourists to the area. Grover had the idea when he looked at a grouping of local trees and thought of the haunted forest in “The Wizard of Oz,” according to a tour bus driver on our recent trip to Oz.

The park, abandoned and vandalized for many years, has been refurbished and opens for one weekend each spring and one in fall for families and lovers of nostalgia. Sweetums bought us tickets for this fall’s event, which was last weekend, as an early first anniversary gift. More blog posts will follow on the other places we visited while in North Carolina.

Y’all, we had the best time. The park’s website calls it an “anti-theme park” because it didn’t have rollercoasters or other thrill rides. Oz was and is an interactive experience, where characters from the books and movie appear along the road made of 44,000 custom-made yellow bricks.

Sweetums and me with the original park sign at the entrance.

Sweetums and me with Professor Marvel.

Sweetums and me with the Tin Man. 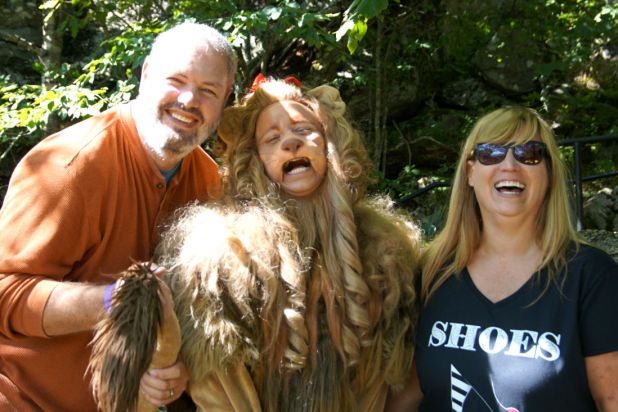 Sweetums and me with the Cowardly Lion.

The Wicked Witch on the Yellow Brick Road.

To begin the experience, guests gather at the bottom of the mountain and board buses to ride to the top. When the park was fully functional, guests could also ride to the top on the park’s only amusement ride, the balloon lift with miniature steel hot-air balloons that ran on a ski-lift line. Today only a metal cage of a balloon survives. At the top, we were welcomed by the pre-twister Oz characters: Professor Marvel, Miss Gulch, Dorothy and Uncle Henry. Dorothy was singing “Somewhere Over the Rainbow” and acting out her search for Toto. Guests then entered a replica of Dorothy’s farmhouse, one of the park’s original attractions. We see the living room and Dorothy’s room, then Auntie Em greets visitors in her kitchen before they pass through a dark area with black-light scenes that recreates the twister experience. On the other side, we enter the post-twister farmhouse, with the floor and walls off-kilter and its contents scattered.

Upon exiting the house, we were in the Land of Oz and followed the yellow brick road to the Emerald City. View the photos at the bottom of this page to see the attractions along the road.

Here is some history of the park from landofoz.com: “The (Robbins) brothers brought on Charlotte-based designer Jack Pentes to survey the land and pitch ideas. After one visit to the top of Beech in 1965, Pentes later recalled that when he noticed the beech trees, ‘The hairs began to stand up on the back of my neck, they were the apple trees in the [Wizard of] Oz movie!” Grover immediately gave Pentes the green light and the rest is history.”

The site continues: “Ray Bolger (the Scarecrow from MGM’s famous film) held a psychedelic shovel that broke ground in 1968 for what would be the first Wizard of Oz – based theme park ever constructed. Designed from a child’s perspective and not to disturb the natural beauty of the mountain, Pentes would use Beech’s natural openings to fill with the character homes of the Scarecrow, TinMan, Lion, the castle of the Wicked Witch of the West as well as the Emerald City finale amphitheater stage and gift shops. Impressively, because of Pentes’s designs, only one large tree had to be destroyed during construction. The pinnacle of Beech Mountain was perfectly preserved.”

The park, which took two years and $5 million to build, once had an amphitheater for children’s shows and a museum that contained original film costumes, including one of Judy Garland’s Dorothy costumes. But the park didn’t last long for many reasons. Grover Robbins died months before its opening and the Carolina Caribbean Corporation went bankrupt from other failed developments.

Also, the Land of Oz site says, “On December 28th 1975, a fire was set to the Emerald City, destroying the amphitheater and its contents as well as damaging the surrounding shops and restaurant. Simultaneously, the museum was broken into and many of the original film costumes bought from the David Weiss MGM Liquidation Auction of 1970 were stolen, including Judy Garland’s original gingham dress, Munchkin jackets, and Frank Morgan’s Guard of the Gate jacket. The damage was astronomical.”

In the 1990s, Emerald Mountain Realty bought the land and built a residential development around the park. Property manager Cindy Keller led efforts to reopen the park for two weekends each year, drawing thousands of tourists to Beech Mountain. Proceeds from the events go to park maintenance.

Photos from Autumn at Oz 2017 by Wil Elrick (please ask permission for use):